While in Anyang, I’ve  had the opportunity and great joy to work with a small group of Expatriate writers who, from January to August 2010, met  bi-weekly in Pyeongchon coffee shops, office-tels and restaurants to share stories, frustrations, goals, and best of all, creative writings. Some of our work consisted of old stories and poems we hoped to revive while others were  inspired by our experiences in S. Korea. On August 22nd, we held a reading at the home of one of our members to share with the world a few of the more significant fruits of our labor. In addition to reading some of our work, we assembled collection of our pieces in a small chapbook to share with attendees and friends. Both the reading and the chapbook were well received. 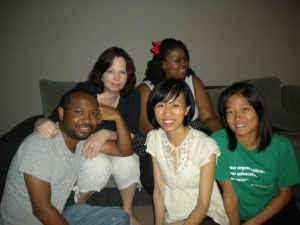 Author Bios (from left to right):

Gary Jackson is the winner of the 2009 Cave Canem Poetry Prize for his first book Missing You, Metropolis. He was born and raised in Topeka, Kansas, and received his Master of Fine Arts degree in poetry from the University of New Mexico in 2008.

Lisa M. Hase (back row) holds a Master’s Degree in English with an emphasis in writing from Kansas State University. Her poems have appeared in such literary magazines as Susquehanna Review, Midwest Quarter and Sub-scribe Online Magazine.

Derrika Hunt (back row) was born and raised in South Florida and much of her writing is inspired by the many challenges she faced growing up there. She writes for all of those voices that have been silenced.

Chau Nguyen was born in Stockton and raised in Pomona, CA, and educated by worldly travels and her folks. She is a graduate of the University of California, Berkeley.