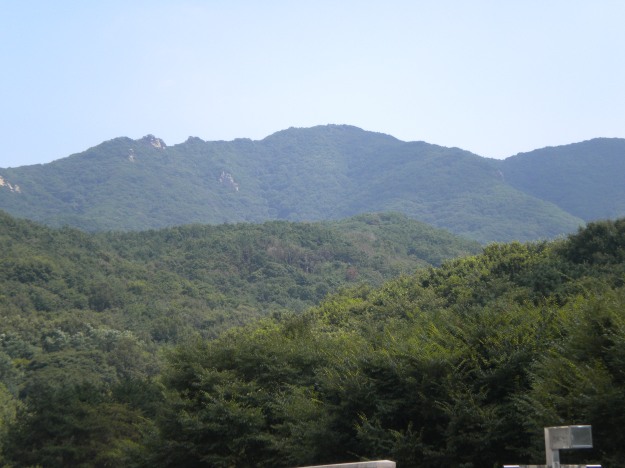 Wow. Well, I guess I can say that I have lived through a typhoon, and while the effects of Typhoon Kompasu were far worse in Incheon and other coastal areas than in Peyongchon, I found the experience quite frightening nonetheless.

I was awakened Thursday morning by the sound of wind at around 6:oo AM, which literally howled through the open windows on either end of the long hallway that runs outside our officetel, sounding much like freight train. Having been raised in the Midwest (in Kansas no less) my first thought was that we were experiencing a tornado, or at least tornadic weather, but then I remember that I am in Korea where there are no tornadoes. I really had no idea what was going on, only that the wind was stronger than anything I’d ever experienced and, unlike storms in the Midwest, it did not subside for hours.

I listened hard to hear if any of the neighbors were leaving their officetels to go to the basement (or rather, the lower five levels of our building), which is what living in the Midwest has conditioned me to do during a storm, or for any indication of how to behave. But, other than the sound of the wind, there was nothing to hear. So I laid in bed imagining the havoc the wind was causing and tried to fall back to sleep. I achieved some fitful dozing over the next couple of hours but no real sleep until the storm had passed.

We had plans to meet friends around 10:00 that morning and go to Dongdaemun, and as we walked to the coffee shop that was our designated meeting place, we noticed downed limbs and broken glass around our neighborhood. The further we walked, the more damage we noticed: vending machines on their sides, windows blown out, small trees uprooted. When we got to the coffee shop, we found they weren’t open yet. One of the owners was out front cleaning up the debris, and fortunately, because the coffee shop is located on the ground floor on the East side of a pretty sturdy building, it had not received any grave damage to its front. Only the owner with the key was late getting to work. We were told, in a quintessentially Korean manner by the owner who was present, to “stay.”

The second owner arrived in a matter of minutes and told us it would take 20 minutes to get the coffee/espresso machine going, so we said we’d come back for our beverages later in the day. But, as we begun discussing our plans to go to Dongdaemun, she mentioned that a couple of the subway lines were down. After some thought and discussion, we reasoned that even if our subway line was cleared for travel, Dondaemun was probably as late opening as was our local coffee shop. We decided to stay and order beverages while we mulled over our next move.

Our decision was to spend the morning somewhere more local, so we hailed a couple of cabs to to carry our five selves across the river to Anyang station, an area known for its shopping.  On our way we saw a lot more damage. Large trees uprooted, glass and metal signs of considerable size lying smashed on the streets, awnings shredded, their frames twisted and deformed on sidewalks, more limbs and broken glass everywhere. I was impressed and realized just how mild the damage I was witnessing must be compared to the coastal areas. I also felt fortunate to live as far inland as I do.

The thing about a typhoon is that its effects are  much more widespread than a tornado’s. Unlike a tornado, which will just take out a farmhouse here, a shopping mall there, topple a few cars and twist a few trees, a typhoon overwhelms an entire geographic area, like a peninsula, and effect all of it. It’s only the degree of damage that varies.

The coffee shop owners mentioned that Korea experiences a storm of such magnitude about once a year, a fact that has been corroborated by several other of our Korean acquaintances.

I suffered no real harm from the experience, only lost some sleep, which I do on a regular basis for much less interesting reasons all the time. But actually living in a place where typhoons exist and getting a sense of the kind of damage they can cause has certainly ignited my imagination and given me a new perspective about them. I really hope I never have to experience one any closer than I have.

Most of my friends, consequently, slept through the whole thing.