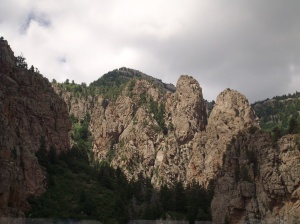 Dale Harris is an Albuquerque potter, poet and author of this week’s Poetry Pick. Her poem can be found in “A Bigger Boat” anthology as published by the University of New Mexico Press. I met Dale and heard her read Manzano Sunflowers at the volume’s book release in the summer of 2008.

Because this poem evokes images of sunflowers, which are as common in the Midwest as they are in the Southwest, it calls forth the character of both regions while yet focusing on the New Mexican landscape. Harris’ sunflowers, therefore, capture more than place and image, but the very essence of sunflower-ness. And while a Midwesterner may not fully appreciate the significance of the arroyo’s image, or never attend the Indian Market, or discern the difference between Manzano or Sandia, she does understand the way sunflowers amass – has seen them take the place of prairie grass – and can appreciate the truth of sunflowers as offered in this poem:

You missed Indian Market and of course, the sunflowers.
As usual they swept across August,
at first a few, a yellow trickle along the fence line;
then more, making pools in the pasture
and splashing down into the arroyo;
then incredibly many more,
dappling the distance as though
a giant hand had buttered the land.

Yet with the entire prairie to expand into
they prefer crowds of themselves.
They mass along the roadsides line up
as though a parade were about to pass.
Here and there one stands alone but not for long.
Soon his kin will come and there will be
sunflower squalor, a floral slum.

Once out they will not be ignored.
Stretching their skinny stalks, they top our roofline,
press against the window screens, peep in a the door.
Familiar footpaths to the outbuildings are obscured
and from the road we seem afloat,
our cabin an odd tin boat in a sea of sunflower faces.

They are the most staccato of flowers.
I catch them humming snatches of polkas
and John Philip Sousa marches,
bobbing in the breeze to the Boogaloo,
the Boogie-woogie and the Lindy Hop.
I call their names, Clem, Clarissa, Sara Jane
to try and tame them.

My neighbor comes by, she has a field full.
They’re useless, she complains;
her horses won’t eat them.
I should hope not, I exclaim after she’s gone.

I don’t remember if you even liked sunflowers
but you like life and they are all about that.
Today I wrote to your family finally.
I expect they are occupying themselves
with beautiful gestures
in order to get over the grief  of you.
As for me, I have sunflowers.

Read more of Dale’s poetry and learn about her pottery skills at Dale Harris Pottery.