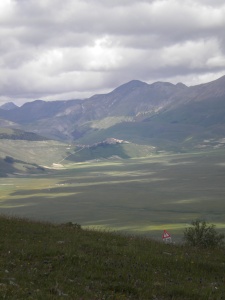 What they felt beneath that cliff
at the turn of an old mule path
from which stretched grape vines,
on that brushy ledge was a tiny draft
urging them to clear grass, sticks.

Wriggling through the hole:
there by headlamps, translucent
stalactites, then a rhino,
red ochre on white rock, red
dots like blood drops on a lion,

What is rare and precious grows
in dream light, in darkness, earth’s slave,
the cavern of sleep. The human edge
of holy, dreams may be packed
with meaning, mass and presence.

Among ancient souls the earth
was created in dreamtime;
sung by each telling its origin,
its animals, plants, people,
songs passed down and down.

Six years the editor of an award-winning children’s magazine, Sheila Cowing has also been a landscaper, a book salesperson, and hardest of all, mother of three daughters. She has published non-fiction and three collections of poetry.  She enjoys great views of two mountain ranges with her five-year-old cat and her aging hound.

Error: Twitter did not respond. Please wait a few minutes and refresh this page.

"So we beat on, boats against the current, borne back ceaselessly into the past.” -F. Scott Fitzgerald, The Great Gatsby